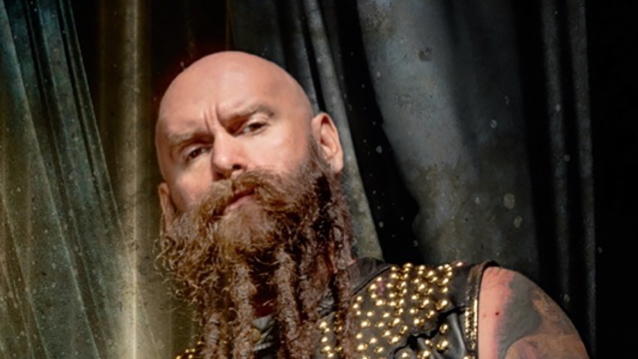 During an appearance on a video podcast hosted by Todd Kerns, the bassist of SLASH FEATURING MYLES KENNEDY AND THE CONSPIRATORS, FIVE FINGER DEATH PUNCH bassist Chris Kael talked about how he has been dealing with the coronavirus pandemic. He said (see video below): "My last show that I played was [on February 22, 2020 on a European tour] in Sofia, Bulgaria, with us and MEGADETH. So, you're, like, 'This is great. Sofia, Bulgaria. This where they recorded the 'Big Four' live DVD. This is great. I'm excited.' Then you come home. And we were just ahead of the curve of all the COVID stuff that was happening. I know Italy blew up the week after we were there. And it was a smaller place that we played there. I remember it being really hot, really sweaty. I was, like, 'Ugh, everybody's in me right now. This sucks.' And then as soon as I heard COVID, I was, like, 'Oh, fuck. We're all getting it. We were there.' And we happened to stay just ahead of the curve the whole time.

"We came home," he continued. " [FIVE FINGER DEATH PUNCH's latest album] 'F8' was released in, I believe, March. [Editor's note: It was actually released on February 28.] It was right after we got back home. We had a tour planned for April-May, I think it was. And everything started blowing up at that point. We had to go into quarantine. So we postponed that one with the hope that by September, October and November, things would kind of die down and we'd figure things out and go from there. At that point, we actually had to cancel that tour.

"We've been staying busy doing some YouTube stuff, going over old videos, kind of watching that — just trying to be entertaining with what we can do," Kael added. "We did the 'Living The Dream' video when they had a little bit of a lull in all the restrictions in California. We got it in just in that window, and then back out. We were supposed to do another video, but California is completely locked down and all that stuff, so we weren't able to do that.

"I'm just looking forward to whatever the new normal is gonna be. I don't give a damn if the vaccine doesn't work. Make people safe, and let us get back out."

The second instalment of FIVE FINGER DEATH PUNCH's greatest-hits collection, "A Decade Of Destruction - Volume 2", came out in October.

"A Decade Of Destruction - Volume 2" contains four previously unreleased tracks: "Broken World", a Steve Aoki remix of "Bad Company", a Joe Hahn remix of "Wash It All Away", a Felmax remix of "Trouble" and a new acoustic version of "Wrong Side Of Heaven".

In October, FIVE FINGER DEATH PUNCH confirmed that it officially parted ways with guitarist Jason Hook back in February 2020, during the band's sold-out European arena tour. He has since been replaced by renowned British virtuoso Andy James, who is also featured on "Broken World".

"F8" was once again helmed by Kevin Churko, the Canadian record producer/engineer and songwriter who currently lives in Las Vegas, where he works out of his private studio, The Hideout Recording Studio. The drums on the LP were laid down by Charlie "The Engine" Engen, who made his live debut with the group during its fall 2018 tour with BREAKING BENJAMIN. The follow-up to 2018's "And Justice For None" capped a turbulent period for FIVE FINGER DEATH PUNCH in which singer Ivan Moody finally got sober after a near-fatal struggle with addiction, while co-founding drummer Jeremy Spencer bowed out of the band due to physical issues.